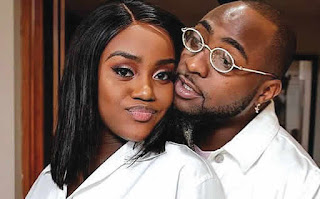 Early this morning on twitter, a fan has expressed a way of asking “why davido and chioma” are yet to get married.
The social media user named scott davis on twitter was putting blames on the Jowo crooner, asking him why he chose to take chioma as a baby mama, adding that instead of marrying her he decided to take her as a baby mama.
READ ALSO: Davido In Joy As ‘IF’ and ‘FALL’ Appears RIAA Gold In The US
Scott Davis in his own way tells davido that chioma is a human with feelings and emotions he shouldn’t play with. Although while his tweet mean why davido and chioma are yet to get married, many other twitter users blasted him saying that davido’s relationship shouldn’t be his business.
In his tweets, he wrote;
“Nigga if you don’t wanna make chioma your wife anymore,just come out and make it official so we all know she’s just a babymama,like WTF man,you stressing that girl alot, I’m a big fan man but come on, she’s also a human and have feelings”.
See his tweets below…… 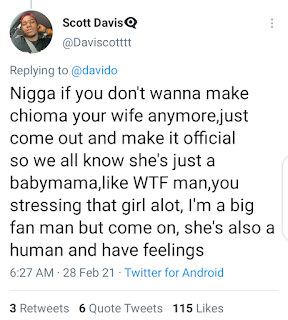 What can you say about this, drop your comments let us know what you have in mind why davido and chioma are yet to get married.
PLEASE SHARE, AND LET US KNOW YOUR THOUGHTS AND COMMENTS BELOW.
Share2Tweet1Send
ADVERTISEMENT
Previous Post

DJ Neptune Shares His Old Photo When He Started In The Industry, Encourages Fans To Be Inspired [PHOTO]