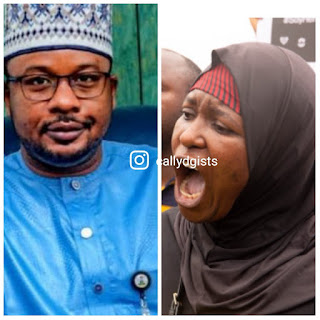 Aisha Yesufu, Nigerian socio-political activist, and co-convener of the Bring Back Our Girls Movement on her Twitter page has expressed the pain which the Nigerian government is imposing on it’s citizens.
Saying that the rate of corruption in our government increases by the day. Also, the arrest of Salihu Tanko-Yakasai, who was the special adviser and a media aide of the Governor of Kano State Abdullahi Ganduje triggered the voice of Aisha.
READ ALSO: “She Is Disgracing That Hijab She Wears” – Buharist Blast Aisha Yesufu
It was recalled that Salihu Tanko-Yakasai known as Dawisu was arrested by the DSS for criticizing the Nigerian government and president by saying that the Buhari’s reign is a shame. Aisha is seriously demanding for the release of Salihu as she believed his actions was right and he said the truth.
Aisha Yesufu on her tweet wrote;
“The incompetent, clueless, corrupt, inept and failure #ICCIF Buhari @MBuhari has  arrested a citizen for criticising his incompetence and asking him to resign. That is not acceptable. Join in making demands to free Dawisu.
You are a citizen not a slave.
#FreeDawisu
#FreeDawisuNow”
See her post below….. 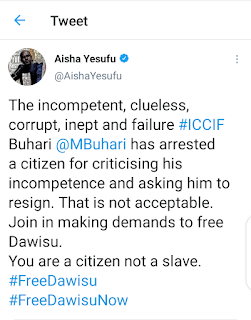 “She Is Disgracing That Hijab She Wears” – Buharist Blast Aisha Yesufu

“She Is Disgracing That Hijab She Wears” - Buharist Blast Aisha Yesufu