“She Is Disgracing That Hijab She Wears” – Buharist Blast Aisha Yesufu 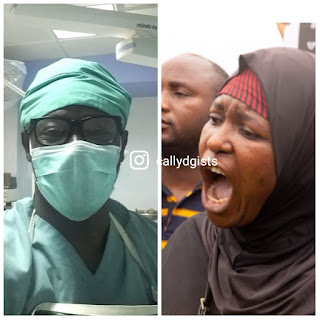 A west african surgeon and a Buharist identified as Adebayo FaKayode slammed the Nigerian socio-political activist Aisha.
Adebayo known as drbebodun on twitter fired Aisha Yesufu back to back because of her online protests she has been shouting on concerning our Nigerian bad government which led to the arrest of Dawisu, looking at the surgeon’s profile it is clear that he is a huge fan of the Buhari democratic policy.
Adebayo in his tweet said that Aisha is disgracing the hijab she wears by ranting unnecessarily about the Nigerian government.
READ ALSO: “Buhari Is Incompetent” – Aisha Yesufu Slams President Buhari For Dawisu’s Arrest
In his tweet, he wrote;
“ 👇👇👇 Wallahi,this @AishaYesufu behaves like a wild boar running riot in Agbede forest. She is disgracing that Hijab she wears.The Hajias i see are epitomes of grace and civility.
Edo people come and carry your mannerless & untamed woman. I hear her husband’s people are tired.”
However, after his post, many people rained insults on him for using such words on the activist as it is clear that she is right about her online protests concerning the country’s bad government.
While some other people on the other hand sided with the surgeon to abuse Aisha Yesufu.
See photo of his tweet….. 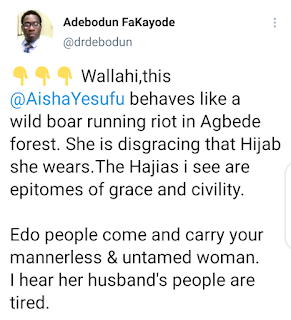