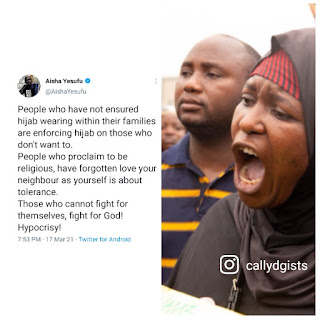 Black Nigerian socio-political activist Aisha Yesufu on her Twitter page slams people who practice hypocrisy and judge people even before they meet them or know them.
Aisha further added that people whose family are not wearing hijab forces others who doesn’t like it to put the hijab on.
And those who claim to love each other but instead shows fake to their neighbors because of envy or greed.
See her post below…

“People who have not ensured hijab wearing within their families are enforcing hijab on those who don’t want to.
People who proclaim to be religious, have forgotten love your neighbour as yourself is about tolerance.
Those who cannot fight for themselves, fight for God!
Hypocrisy!” 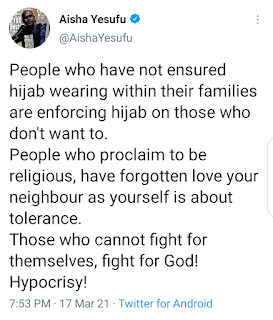