“My Idol Sings Wack Songs, Wizkid Will Always Be Better Than Him” – Fan Slams OBO Davido 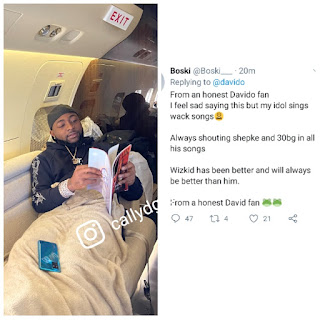 A twitter user who claims to be a fan of Wizkid made some slam talks on the Nigerian popular musician OBO Davido.
The twitter user known as Boski on twitter replied to the post of OBO when Davido tweeted “WHERE UNA DEY SEE THIS MONEY” other fans made cool and funny replies as they believed the singer’s post to be a cruise. But Boski instead blasted Davido saying that instead of him to make good songs, he is instead shouting”SHEPKE AND 30BG”.
Boski’s reply was;

From an honest Davido fan
I feel sad saying this but my idol sings wack songs😩
Always shouting shepke and 30bg in all his songs
Wizkid has been better and will always be better than him.
From a honest David fan 🐸🐸

This reply from Boski made music look like Wizkid is far more better than OBO maybe because he won the latest Grammy award together with Burna Boy.

READ ALSO: “Why Davido And Chioma Are Yet To Get Married” – Fan Blasts Davido 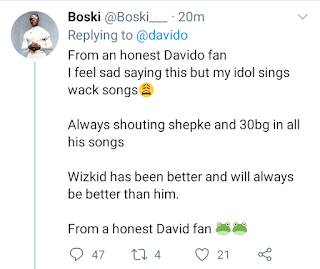 Other twitter users insulted Boski for making such statement on OBO Davido.

If you feel Davido is still far more better than Wizkid, PLEASE SHARE, AND LET US KNOW YOUR THOUGHTS AND COMMENTS BELOW.

“Nigeria Is Not Worth Dying For, They Would Continue To Be In Backwardness” - Citizen Blasts Nigerian Govt