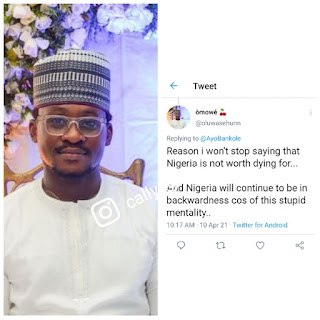 A Nigerian citizen on twitter made a post on Nigeria present ruling government, saying that the country’s government is not a good one to be.
The twitter user identified as Ayo Bankole who according to his profile is a strategist and convener of LagosMeBootCamp . Ayo made his tweets following Oby Ezekwesili, the convener is making complaint asking why people like Oby Ezekwesili who do great things for Nigeria hasn’t been rewarded.
Bankole said;

It’s really discouraging to see great people like Oby Ezekwesili do great things for Nigeria that attain global acclaim, including a Nobel Prize nomination, and yet consistent attempts at discrediting her at home cos of politics. It leaves one questioning if it’s really worth it?

This post by Ayo Bankole made other Nigeria citizens make complains and say bad things against the government. A user named Oluwasehunn  followed up Bankole’s post and question with another blastful comment saying that Nigeria is not a country that is worth dying for and the country will keep on moving in backwardness.

And Nigeria will continue to be in backwardness cos of this stupid mentality.. 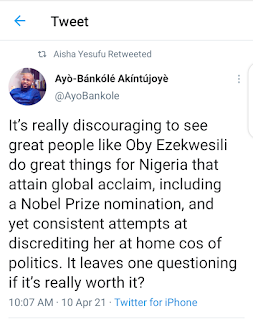 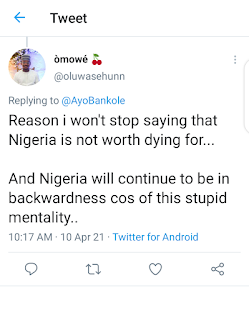 PLEASE SHARE, AND LET US KNOW YOUR THOUGHTS AND COMMENTS BELOW.

“My Idol Sings Wack Songs, Wizkid Will Always Be Better Than Him” – Fan Slams OBO Davido