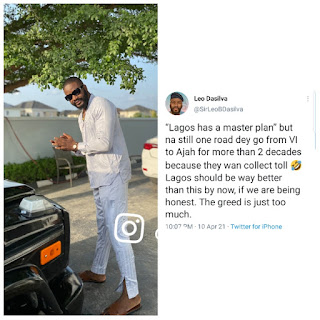 Ex-bbnaija housemate and humanitarian popularly known as Leo Dasilva has on his Twitter page slammed the lagos state bad government and failure to repair the bad roads.
Leo made complains in his tweets concerning the road across the state adding that the greed is too much for the state. He centered on the road between Victoria Island (VI) to Ajah axis.
He said that the road is still a one way go for over 2 decades now, saying that lagos is bigger than this problem that the road issue is supposed to have been fixed by now.
See his tweet below;

“Lagos has a master plan” but na still one road dey go from VI to Ajah for more than 2 decades because they wan collect toll 🤣
Lagos should be way better than this by now, if we are being honest. The greed is just too much.

COVID-19 Vaccination For 20 LGA And 88 Sites In Lagos, Check The Closest Site To You