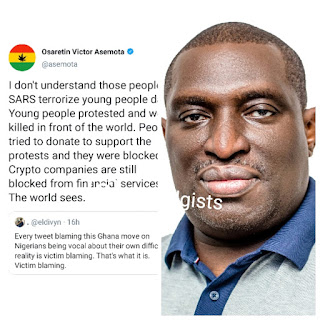 A man identified as Osaretin Victor Asemota on twitter known to be a retired investor according to his account has showed remorse for the innocent souls killed during the ENDSARS period.
Victor Asemota made reply to a tweet saying that innocent youths died while fighting for their rights and were killed. Adding that people also tried to donate and support the protest but instead they were blocked and not allowed.
He also made complains on the Crypto ban Nigeria enforced on her citizens.
See his tweet;

I don’t understand those people.
SARS terrorize young people daily. Young people protested and were killed in front of the world. People tried to donate to support the protests and they were blocked. Crypto companies are still blocked from financial services. The world sees. https://t.co/FbekcZW28U

“Why Can’t We Register Or Buy SIM Cards, It Is Affecting Us” – BBNaija Leo Slams Nigeria Govt