Today, The Author Of ‘EZE GOES TO SCHOOL’ Died 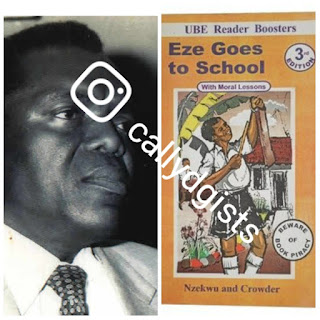 So sad that today in history, we remember the death of Chief Onuora Nzekwu, who was a well known writer, broadcaster and book author. Onuora is from Onitsha, Anambra state. In May 1966, he wrote the popular novel,
EZE GOES TO SCHOOL, which went viral and gave him game and much visibility.
Chief Onuora died on this day 2017, aged 89.
These are some of the books he wrote before death, some of which most of us should know:
Wand of Noble Wood- 1961
Blade Among the Boys – 1962
Highlife for Lizards – 1965
Eze Goes To School – 1966
The Chima Dynasty in Onitsha- 1977
Faith Of Our Father’s – 2003
Trobuled Dust- 2012
Ahmad Daggash (Story of the True) – 2016.
Gone but not forgotten! Really a legend.
May his soul rest in peace….FROM CALLYDGISTS.
Share2Tweet1Send
ADVERTISEMENT
Previous Post