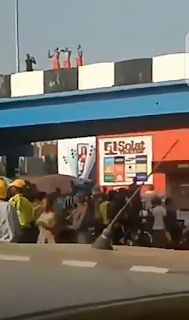 3 yahoo boys have been seen on a viral video seriously taking their bath on a bridge in Ibadan, Oyo State during day time this Tuesday.
We recieves reports that the incident happened at Mokola bridge in Ibadan. The guys on the video are suspected to either be yahoo plus guys or maybe just some people shooting a video.
The 3 men were seen in red wrappers tied round their waist, as they were rubing their bodies with soap all around which made people looked them with shocked.
Watch video below;
Share4Tweet3Send
ADVERTISEMENT
Previous Post

“Minna Villages Have Been Ransacked, No Food, No Shelter” – Villagers Complain