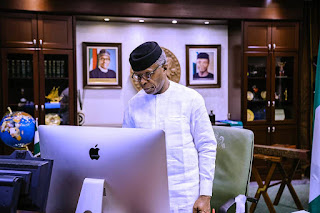 We have made some researches and decided to bring up the good deeds and talks some notable men on the Nigerian vice president Yemi Osinbajo.
READ ALSO: “You Will Be Reported To The Pope For Threatening Buhari” – APC To Father Mbaka
It appears to be that people are really against Yemi Osinbajo and they have been plotting bad against him, people have been trying to bring him down.
The reasons and those who said it are;
“You kept your country together in peace while President Muhammadu Buhari was away. That is a good model for other vice presidents to follow,” – President George Weah of Liberia.
READ ALSO: 50 Completed/Ongoing Projects By Buhari And Osinbajo In Nigeria Today [PHOTOS]
“Through the exemplary dedication to the service of humanity, humility and the godly disposition to leadership of Osinbajo, Nigeria will find solutions to its challenges”. – CAN President
VP Osinbajo Has Revolutionised Judiciary in Nigeria” – Emir of Lafia, retired Justice Sidi Bage Muhammad
Osinbajo leadership is given to him by God. – Sultan of Sokoto
Osinbajo is the most trustworthy vice president Nigeria ever had because of his interest in the nation”. – The Emir of Daura, Alhaji Faruk Umar
Share2Tweet1Send
ADVERTISEMENT
Previous Post