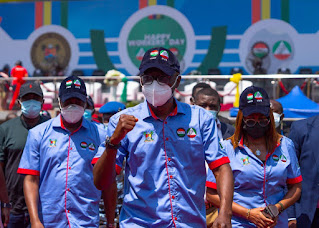 Lagos state governor Babajide Sanwo-olu has praised his workers and cooperatives of LAGOS state on this day been the workers day.
Babajide Sanwo-olu praised them and encouraged them to work more and put in more effort as he increased wages for them and also increased allowances.
He said;
“Today, to commemorate WorkersDay, I approved 10 hectares of land in Idera, Ibeju Lekki and Badagry for the workers housing scheme.”
“Our administration recognizes that a productive workforce remains the backbone of a prosperous society and we see workers in Lagos as important stakeholders in the growth of the State’s economy. We are already paying N35,000 minimum wage which is above the FG’s N30,000.”
“To further ease the burden of transportation on workers, we are increasing the fleet of our buses and we are going to support labour unions in Lagos with buses to assist in the movement of workers.”
“We are also paying attention to our pensioners by amending our Pension Commission Law to include labour representatives.”
“We have increased the allowance we pay to pensioners and we have consistently ensured that pensioners get their pension at the same time State workers get their monthly salaries.”
“Lagos State values you dear worker and today we celebrate you and all you do.”
Happy Workers Day.
Share1Tweet1Send
ADVERTISEMENT
Previous Post

You’re A Sinner: Naira Marley Insulted By Fans For Praying And Quoting The Holy Book

You're A Sinner: Naira Marley Insulted By Fans For Praying And Quoting The Holy Book