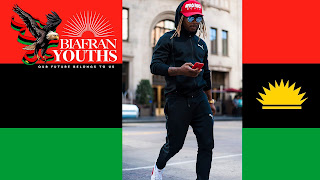 Kal Afrorock, a Nigerian IGBO Biafran American Musician who is based in the US is opening up his protest as he is showing the people that he is a Biafran.
Kal Afrorock on his twitter page said that the Nigerian government is a liar as it had tried to erase his history as a Biafran. He also said that he would continue to remain a forever Biafran.
Kal Nwaneri commonly called by his stage name KAL, is an American based artist, record producer and entrepreneur. He was born in Nigeria; a big fan and member of the Igbo ethnic Biafran group.
READ ALSO: IPOB Second In Command Nabbed By Security Operatives In Abia State
Growing up in Aba, Nigeria, KAL was surrounded by musicians in his family, a highly artistic mother, and a strong tribal culture. The oral tradition of storytelling through music, including singing, drumming, dancing, and masquerading, had a tremendous impact on KAL’s unique sound and stage performance.
Kal Afrorock, his parents and his five siblings, left Nigeria for the United States in 1998 to escape hardship and start a new life.
See his tweet;

Nigeria Government lied to me & tried to erase my History as a #Biafran. In this 21st Century, you best believe we gonna Rewrite the History.

I AM A BIAFRAN🌤