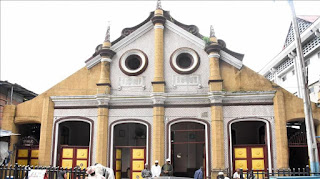 Shitta-Bey Mosque, is a religious learning centre and one of the oldest mosques in Nigeria.
The mosque is located at Martins Ereko Street, Lagos Island, Lagos, Nigeria.
It was established in 1892 and designated as  National monument by the Nigerian Commission for Museums and Monuments in 2013.
The mosque, considered one of the most important historical legacies of Nigeria.
Shitta-Bey Mosque was named after its founder Sierra Leonean-born Nigerian, Mohammed Shitta, honored by Turkey’s Ottoman sultan with the title ‘Bey’.
He was an aristocrat, philanthropist and a businessman.
Shitta mosque was designed and built in 1892 by Joas Baptista da Costa.
Share1Tweet1Send
ADVERTISEMENT
Previous Post