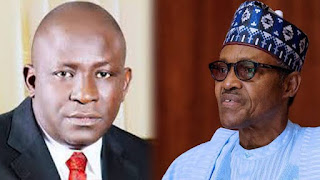 The PDP says the latest revelation of $65 million (N31 billion) fraud in the Federal Mortgage Bank of Nigeria (FMBN), in which President Buhari’s son in-law, Gimba Yau Kumo, is reportedly involved, further confirms that the Bubari Presidency is indeed a sanctuary for fraudsters, treasury looters and common criminals.
The party charges the ICPC Nigeria not to succumb to reported pressure from the cabal in the Buhari Presidency but to track down Yau Kumo, the former Managing Director of the FMBN,who had already been declared wanted, and bring him to book alongside his accomplices.
It speaks volumes that the Buhari Presidency had remained silent in the face of this huge fraud involving Mr. President’s son in-law; a beneficiary of the primitive family patronage in the Buhari administration, only for certain members of the cabal to be reportedly mounting pressure on the @ICPC_PE to let him off the hook.
The PDP holds as wicked, afflicting and provocative that while millions of hardworking Nigerians cannot afford their daily meals and other basic necessities of life due to the misrule and corruption of the APC and its administration, they are daily assailed by revelations of unbridled treasury looting under President Buhari’s watch.
Is it not provocative that at the time the Buhari administration is moving to cut  workers’ salaries; increased the cost of fuel, electricity and other tariffs; in a country with over 33 percent unemployment and where citizens have been subjected to the worst forms of poverty; government officials, cronies and relations of those in power are busy looting our agencies and carting away our common patrimony?
It is even more distressing that the looted FMBN money is part of funds contributed by Nigerians to meet their home needs which has instead fallen under the predatory proclivities of the APC administration.
The party asserts that Nigerians can now see that while the Buhari Presidency parades a “holier than thou attitude”, the nation’s vaults have been laid open for the ruthless pillaging by family members, relations, cronies in the Buhari Presidency.
Only last week, the nation was jolted by reports of the looting of over N165 billion in the Nigeria Ports Authority (NPA) under the suspended Managing Director, Hadiza Bala Usman and the purview of the Minister of Transportation, Rotimi Ameachi, leading to widespread demand for their sack and prosecution.
This is in addition to the alleged involvement of the wife of the Transportation Minister, Mrs. Edith Amaechi, in the reported N48 billion contract scam currently rocking the Niger Delta Development Commission (NDDC).
The PDP urges the Buhari Presidency to allow for an open investigation of Mr. President’s son in-law as well as those fingered in the fraud in the NPA and the NDDC.
See statement read; 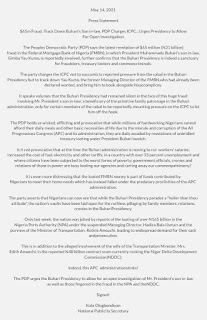 UNBELIEVABLE!!! Producer Collaborates With A Cat To Make Music [VIDEO]