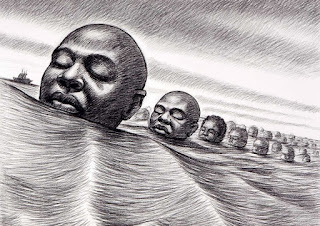 On this day, May 28, 1803, around 75 Igbo slaves who were being transported by sea revolted by capsizing their ship and drowned themselves while singing in Igbo, a song that translates to “the water spirit brought us. The water spirit will take us home”. (Mmụọ mmiri du anyị bịa, mmụọ mmiri ga-edu anyị laa.)
Igbo Landing is a historic site at Dunbar Creek on St. Simons Island, Glynn County, Georgia. In 1803 one of the largest mass suicides of enslaved people took place when Igbo captives from what is now Nigeria were taken to the Georgia coast. In May 1803, the Igbo and other West African captives arrived in Savannah Georgia, on the slave ship, the Wanderer. They were purchased for an average of $100 each by slave merchants. 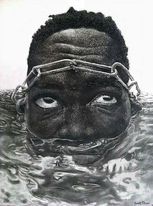 John Couper and Thomas Spalding for forced labor on their plantations in Simons Island. The chained slaves were packed under deck of a coastal vessel, the York, which would take them to St. Simons Island. During the voyage, around 75 Igbo slaves rose in rebellion, took control of the ship, drowned their captors, and in the process caused the grounding of the ship in Dunbar Creek. They thereby accepted the protection of their God (Chiukwu) and death over the alternative of enslavement. The sequence of actual events is unclear, as most of the historical incidence was passed down by oral tradition.
A common version credited to Roswell King, a white overseer on the nearby Pierce Butler plantation is that the slaves, once ashore, walked into the creek is unison, singing and chanting in Igbo under the leadership of someone who seemed to be like a high priest among them.
This mutiny has been referred to in some quarters as the first major freedom march in America’s history.
The event has recently been incorporated into the history of coastal Georgia schools in America.
Beyonce Knowles depicted and paid homage to the Igbo Landing in her work “Love Drought”. Blank Panther movie also refered to the event, etc. As we mark 218 years of Igbo Landing, may the souls of our brave and gallant Igbo brothers and sisters rest perpetual.
Share1Tweet1Send
ADVERTISEMENT
Previous Post