The Death Of TB Joshua 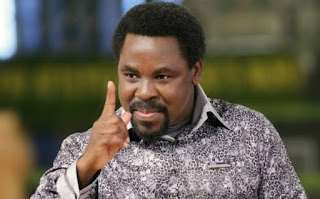 It has been confirmed earlier today by one of our reporters that Mr. Temitope Balogun Joshua, popularly known as prophet T. B. Joshua, is dead. His death occured on the 5th of June 2021.
Prophet TB Joshua is the Leader and Founder of The Synagogue Church of All Nations, SCOAN. Joshua was known for his popularity across Africa and Latin America.
TB Joshua’s death was like a mystery as the news struck his members and fans. It was gathered that he went for an evening service and didn’t return.
One of the deceased member was contacted while in tears. She confirmed his death to be true.
She said: “The death occurred when the cleric left ‘the mountain’ to minister to the people, which was televised live on Saturday.”
However, she said a few minutes later, TB Joshua left. Which was unusual.
They were then told “the man of God said he can no longer attend to us.”
He died at the age of 57. It has gone viral that he died of stroke.
May his soul rest in peace….AMEN.
Share2Tweet2Send
ADVERTISEMENT
Previous Post

LASMA Collected Girl’s Phone, Beats Her Up, Tore Her Dress And Called The Police On Her

LASMA Collected Girl's Phone, Beats Her Up, Tore Her Dress And Called The Police On Her