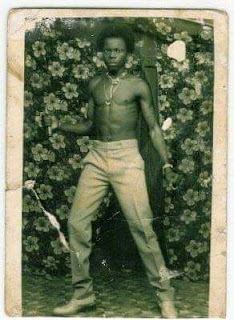 Gbenga Adeboye. The first internationally successful Nigerian comedian.
Everything huge Nigerian comedy stars like Basketmouth, Bovi, and Alibaba do with standup or film today was pioneered by Gbenga Adeboye. The same goes for today’s viral social media comics like Maraji, Crazeclown and Twyse – the characters that inform their comedy and the skit format was pioneered by Gbenga Adeboye. He was an MC, radio host, actor, producer, poet, musician and multi-disciplinary entertainer who dominated the Nigerian comedy space in the mid to late 90s before his passing in 2003.
Born Elijah Oluwagbemiga Adeboye in Ode Omu, Gbongan LGA, Osun State, Gbenga Adeboye started out hosting a radio show on Radio Lagos called Funwontan. The show was mostly freestyle sessions with Gbenga’s improvised characters and his blend of Yoruba dialects interwoven with ewi. The show soon took off and became very popular leading to demand for Gbenga’s content. The name of the show even became one of his aliases. The characters, Yoruba dialects and incantations remained throughout his career.

Soon after he began to produce his content independently and setup his own production company called Gbenga Adeboye Productions through which he released his comedy albums, videos and films. It is unlikely that the publishing deals behind these works are properly structured but Gbenga Adeboye definitely made a lot of money from his business ventures across entertainment in his lifetime.

Though most of Gbenga Adeboye’s content revolved around humor, he tapped other aspects of entertainment to push his art. He released music regularly, made short films and comedy albums. He made well-told skits, created numerous characters that became monikers and embraced it all in his personal life. He often referred to himself with the religious titles “Alhaji Pastor Oluwo” and would often quote bible verses, quranic verses and incantations in succession. Also known as Jengbetiele 1, he claimed to be both a Christian and a Muslim. He did stand up, performed at shows, featured in movies and toured. In an interview with Yemi Shodimu on the popular Mainframe TV show Arambada”, Gbenga Adeboye said, “I’m just grateful to God for this talent. Being able to do what do is not easy and am aware of how great a blessing that is. That is why I just love to talk, my parents used to scold me as a kid because i would talk too much.”

In 1994, Gbenga Adeboye went on his first standup and music tour of a few American cities, later releasing the audio and video from it as the “American Exposure” series of comedy albums. He was the first Nigerian comedian to go international and pioneered many aspects of the industry today both on the creative side and the business side. Before his death in 2003, he went on a few more tours to the US and Europe.

Though Gbenga Adeboye played primarily in the Yoruba and Southwest market he often spoke Igbo and Hausa and even had characters in those languages. He also mentored other entertainers like Yinka Ayefele, Abbey Fagboro, Ereke ni Soobu, Bashiru Adisa also known as Baba Gboin. Nollywood actress Fathia Balogun also got her big break after featuring in a Gbenga Adeboye music video. He pioneered comedy albums before Gordon’s even had a comedy career and toured decades before
Basketmouth and Bovi. Gbenga Adeboye predates the founding fathers of modern day Nigerian comedy Muhammed Danjuma, Alibaba and Opa Williams. He made skits before Maraji and Twyse and created colorful characters before either of them were even born. Even in death, there is arguably no one as talented nor as versatile as Gbenga Abefe Adeboye. A whole legend.
Unfortunately, a lot of his work has not been digitized yet but some of it can be found on YouTube. His estate needs to get his comedy albums on Apple Music and Spotify so the next generation can experience the greatness of this legend. They should also get his videos on Netflix or original versions on YouTube. There is so much content to immortalize him with and hopefully we get to have them someday.
SUN RE O BABA.
Share2Tweet2Send
ADVERTISEMENT
Previous Post

LASMA Collected Girl’s Phone, Beats Her Up, Tore Her Dress And Called The Police On Her