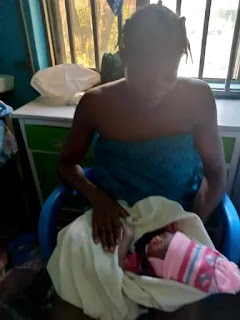 A Nigerian pregnant 18-year old girl, known as Kemisola Oguniyi, who was arrested during the ENDSARS protest in Akure, the Ondo state capital has given birth in prison custody. She gave birth to a baby boy
Kemisola has been in prison custody since October 24 last year. She was remanded with some others who were accused by the security operatives that arrested them of being amongst those who razed the state Secretariat of the All Progressive Congress.
Kemisola was arrested alongside three others who were later remanded in Ondo prison custody. Some other people were also remanded with her at Surulere prison, they are; Ayodele Bukunmi, Ojo Samuel and Ani Obinna.
It was gathered that Kemisola was on her way to the Federal University of Technology Akure (FUTA) to collect money for her mother’s treatment when she was arrested by the Nigerian Army on random raiding and handed over to the Police for investigation. It was said that she was among those individuals that burnt the APC Secretariat in Akure on fire during the ENDSARS protest that took place last year.
Although, her friends and family members have pleased with the judiciary and state government to set the new mom free at least for the sake of the child.
Share2Tweet1Send
ADVERTISEMENT
Previous Post