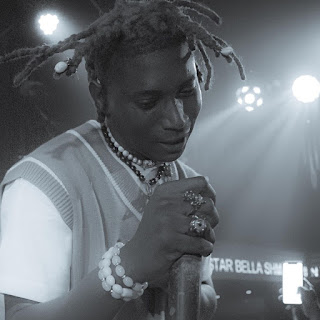 To most Nigerian music fans, the story of the star “Bella Shmurda” is like an inspiration to them. Bella Shmurda as his stage name implies was born as Akinbiyi Abiola Ahmed  (born 27 January 1997), Bella is a Nigerian songwriter, rapper and hip hop singer. Bella started gaining fame when he released “VISION 2020” remix with the YBNL boss Olamide.

Bella Shmurda was born and brought up in Okokomaiko in Ojo, Lagos state with his parents and had his primary and secondary education in the same area. After his elementary school, Bella took in Jamb and gained admission in the year 2016 into the Lagos State University [LASU]  and studied History and International Relations.
READ ALSO: Biography Of Poco Lee Nigerian Dancer, Age, Career, Relationship And Net Worth
Unlike what was written in the first paragraph, Bella Shmurda gained popularity after his debut single “Vision 2020”, and a follow up (remix) to the single which he featured Olamide the Baddo. However, he made many hit songs in 2020, some which featured top musicians, one of which is “Cash App” featuring Zlatan which got him more fans and made the people’s love for him grow harder. Then, he was nominated for the Headies Award for the next rated in 2020. Adding to that, the 24-year-old star also bursted everywhere with the release of TRIUMPHANT with Olamide and FADE where he was featured by OBO Davido. 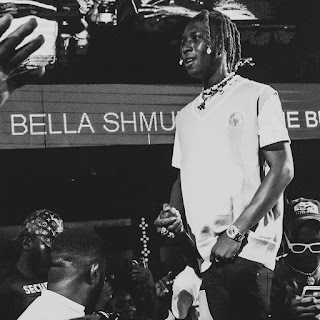 Listening to the songs of Bella Shmurda, it is shown and proved that the music star passed through many difficulties to get to this stage. I am writing this biography following the fact that I grew up in the same area near Okokomaiko, so I will be explaining how hard things are over here.
Bella Shmurda is one of his kind, a singer who followed his goal to achieve success, starting from VISION 2020, it is clear that he passed through hell when he said he has been hustling but all to no avail. The singer has gone through lots of insults from both families and friends, and oppressors but still he stood up to achieve his goal.
After he gained popularity with Olamide, rumors had it that he got signed into YBNL by Olamide. No, Bella Shmurda wasn’t signed into YBNL but was signed into another record label called DANGBANA REPUBLIK affiliated with YBNL.

BELLA SHMURDA’S NET WORTH AND OTHERS

Bella Shmurda’s net worth according to forbes 2021 range from $700,000 to $800,000.
People believed that Poco Lee and Bella are best of friends because they both grow up in the same area, although Poco Lee grew up in Alaba, Ojo Lagos state. But they both attended the same university in Lagos.
Share2Tweet1Send
ADVERTISEMENT
Previous Post

Biography Of Mayorkun; Age, Education, Awards, Relationship And Net Worth

Biography Of Mayorkun; Age, Education, Awards, Relationship And Net Worth