by JNR CALLYD
in Uncategorized
4 0
1 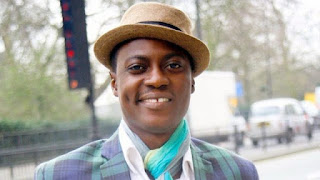 What a sad news to hear that Sound Sultan is dead. Olarewaju Fasasi stage named Sound Sultan was a Nigerian singer, rapper, influencer, comedian and actor.
He is known to be one of the Nigerian father of hip hop music. According to reports, the singer died this morning due to throat cancer of which he could not survive.  A statement was released by the family to the press.
The statement read;

“IT IS WITH HEAVY HEARTS THAT WE ANNOUNCE THE PASSING OF MULTITALENTED VETERAN SINGER, RAPPER, SONGWRITER OLANREWAJU FASASI A.K.A SOUNDSULTAN HE PASSED AWAY AT THE AGE OF 44 FOLLOWING A HARD FOUGHT BATTLE WITH ANGIOIMMUNOBLASTIC T-CELL LYMPHOMA. HE IS SURVIVED BY HIS WIFE, THREE CHILDREN AND HIS SIBLINGS. WE HIS FAMILY WILL APPRECIATE THE UTMOST PRIVACY AS WE COME TO GRIPS WITH THIS TRAGIC LOSS.” 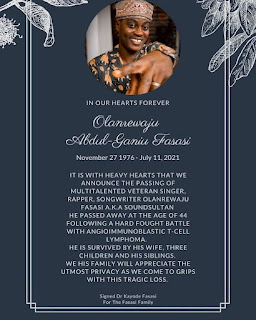 Sound Sultan before his death was survived by his wife and three children.
Share2Tweet1Send
ADVERTISEMENT
Previous Post