The Oba of Benin, Omo N’Oba N’Edo, Uku Akpolokpolo, Oba Ewuare II, is extremely in full joy as he welcomed a set of Quadruplets, 3 boys and a girl, from his fifth wife, Princess Queen Aisosa Ewuare II. Thanking God for safe delivery.
On the month of May 2020, it would be recalled that Oba Ewuare II, welcomed his first male child and Prince from her Royal Highness, Princess (Oloi) Iyayota Ewuare II after he ascended the throne of his forefathers as the 40th Oba of Benin.

The Oba and his council made the announcement at 4:57 p.m at his palace on Friday, August 6, in Benin City, which followed by jubilation in the palace.
The monarch paid a tribute and thanks to God and his ancestors for such Blessing in his life and he praised his fifth wife.
The Monarch wrote a statement. Read statement below; 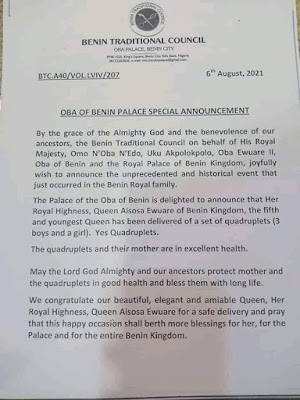 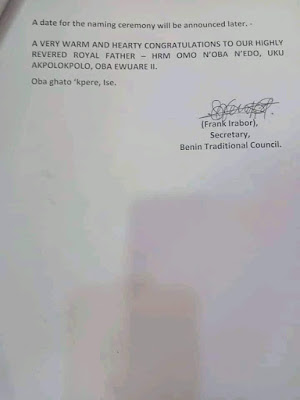 Although the naming ceremony is yet to be announced.
Share2Tweet1Send
ADVERTISEMENT
Previous Post