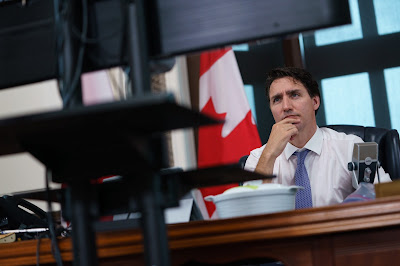 Canada Election 2021: Justin Trudeau Ask Fans And Citizens To Send Him Their Best Ideas And Questions As He Discloses His Number.
Justin Trudeau who is a Father, husband,
Liberal Party Leader, and currently the 23rd Prime Minister of Canada has on his Twitter page disclosed his cell phone number as he asks people, fans and citizens to reach him out.
He said that he would be open to questions and ideas whenever he is less busy as he would look for all ways to reply the messages.
On the video he posted, the Canada prime minister Justin Trudeau said;

Hey everyone, over the next few weeks, I’ll be cross-crossing the country talking with canadians. While on out there, I’m also going to be checking my texts, so make sure you reach out to me to share with me your concerns, your priorities and how you think we can keep moving forward for everyone. My number is (613)777-2039, so text me and we’ll keep moving forward together.

Watch the video he posted below;

It’s always busy on the campaign trail, but I’ll be responding to texts from the road whenever there’s a moment. Send me your best ideas and questions! pic.twitter.com/CLSQkc3HRV

Hi guys, thanks for reading. So how does this new action from the canadian minister look like to you? What does it seem like to you? Do you think what Justin Trudeau just did was the right decision to make?

However, some commentators below the post said this could be his new strategy to win the Canada election 2021. Well you can share with us your own opinion and feedback in the comment section below.