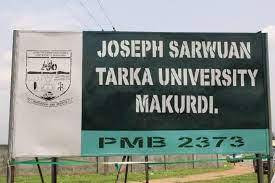 A 400-level student of Joseph Sarwuan Tarka University, Mechanical Engineering has been accused of defiling and impregnating a 14-year old girl.
The student identified as Michael Nyitor made this atrocity in the Gaadi area of Makurdi, Benue State.
It was reported that Michael lures the girl and knew the girl through a close relative of the teenager and had has been having carnal knowledge of her till she became pregnant.

The aunt of the little girl who made reports said that she had been suspecting some filthy movement from the girl. That she used to sneak out of the house late at night and returns home 5am in the morning. When michael was questioned, he lied and denied having anything in common with the teenager.
After some investigations and other actions taken by the teenager’s family, Michael later confessed that he had carnal knowledge of the girl and he impregnated the 14-year old girl.
Although he pleaded and asked for forgiveness from the family, he is currently in the police custody.

THANKS for reading fans, so what do you think about the issue of Michael and the 14-year old girl? What is your judgement?