I Bought Him A Brand New Hilux, Diamonds, He Blackmailed Me, Wanted To Kill Me; He Should Rout In Jail – Tonto Dikeh 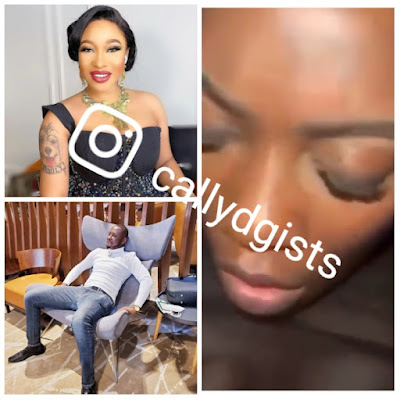 READ ALSO: Stop Posting Tiwa Savage’s Tape, It Will Be Bad For Her Son; Imagine Your Sister In Her Condition – Bbn Tochi Says

A fan, Doris Ogala made comments on the arrest in an Instagram post she shared recently. Although she didn’t give names, she however stated that the person will be “sleeping with mosquito” till Wednesday October 20.
Reacting to what happened between Kpokpogri and Tonto Dikeh, a fan on IG known as Doktorfabz suggested that Tonto return the car she seized from her ex-boyfriend.
This comment from Doktorfabs made her angry so she replied him;

Let God not punish you for this nonsense.
Has he returned my Brand new Hilux I bought for him ?
My diamonds i got for him..
Shouldn’t he answer to blackmailing me with my sex tape illegally recorded or the release of a vulnerable momentt illegally recorded and released ????
In my opinion, he deserves no mercy, LET the law prevail.
If I were the law, he will rot in jail but i am not.
HE needs to answer for putting a gun to my head (attempted murder) Threatening my life and the possession of over 30 illegally recorded sex tape. 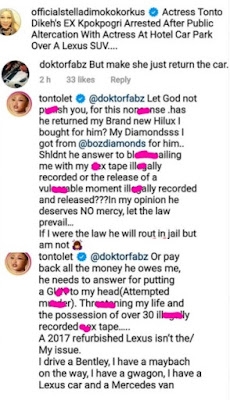 Fans React As Angel Bbnaija Gets Hospitalized On Drip – VIDEO

Stop Posting Tiwa Savage’s Tape, It Will Be Bad For Her Son; Imagine Your Sister In Her Condition – Bbn Tochi Says

Stop Posting Tiwa Savage's Tape, It Will Be Bad For Her Son; Imagine Your Sister In Her Condition - Bbn Tochi Says