Popular season 5 Bbnaija star Dorathy has on her instagram page revealed her relationship status. Fans was expecting her to be in a relationship with Prince Nelson due to their closeness but her response really disappointed her fans.
Both Dorathy and Prince were colleagues and good friends. They were also housemates 2020. After the 2020 Bbnaija show ended, Dorathy and Prince were so close as ever, this made fans thought they were in a relationship.
Even, Dorathy paid visits to Prince’s royal family and she is now a family friend too. She made it open that she can’t date Prince, she described him as a brother and calls it an abomination to date a brother
Dorathy disclosed this during a Question and Answer session she did on her Instagram page. During the session, a fan asked;

In response to the question of the fan, Dorathy replied;

How does your boyfriend feel about your male friends, mostly Nelson 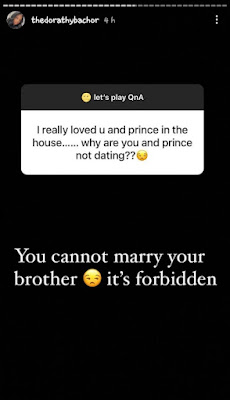 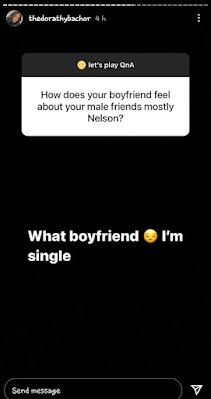 Hi guys, thanks for reading, so what do you think about the relationship between this two intimate housemates?

Do you think Bbnaija Dorathy is saying the truth that she has nothing to do with Prince? Or she and prince are really in a relationship?

Stop Posting Tiwa Savage’s Tape, It Will Be Bad For Her Son; Imagine Your Sister In Her Condition – Bbn Tochi Says

“No Man Pays My Bills, I Started Been Successful Since I Was 16” – Bbnaija Maria Says Despite Her Viral Video With A Married Man

“No Man Pays My Bills, I Started Been Successful Since I Was 16” - Bbnaija Maria Says Despite Her Viral Video With A Married Man